At the Top of National Racing for over Thirty Years.

In 1980 Geoff went to Belgium on a coach trip and was introduced to the Deweerdt family from Kortemark.  He quickly established a good friendship with Emile and purchased some birds which were to be the foundation of his loft today.

More details of these birds are in the articles section, in English Icon article written by Mike Lakin or under the Origins of the Cooper Colony.

Geoff has always maintained that the breeding loft is where the success of the loft is founded.  Many people can buy good pigeons but it is what they do with them afterwards that determines their success, or lack of it!

When we look back to the 1980’s and see the fanciers names at the top of National racing, the name Geoff Cooper, or G.G.Cooper as he used to race, was always there, amongst many other good fanciers.  It was the same throughout the 1990’s and 2000’s. The only fancier out of all of the “names” who were winning then, who is still winning now is Geoff.  The remarkable record is due to the care and diligence of his breeding programme, paying attention to the winning genes and not losing them through out crossing.  In 1984 Geoff had an exceptional years breeding.  He bred a team of birds that had everything.  They flew for hours from the start, roaming up and down the valley, flying for the love of it.  When it came to racing these birds they were winning from the first young bird race to the last.  In a National race from Guernsey where Geoff’s birds had to fly 80 miles 128 kms over the sea, he took 1st, 2nd, 3rd and 8th only sending six birds.  The majority of the birds were flying to the east of England, Geoff’s birds  had to fly as babies most of the journey on their own.  These brave birds were to become the record breakers for Geoff and then for many other fanciers in the UK. 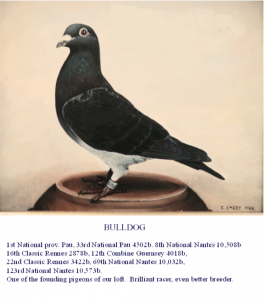 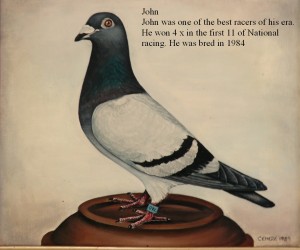 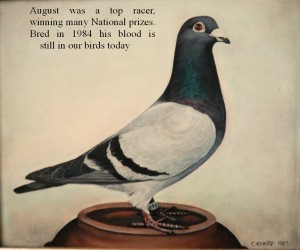 The genes of “Bulldog”, “John”, “August” “53” “the “Old Deweerdt” and many other 1984 birds can be found in the colony today.  In 1988 “Bulldog” won 1st National section Pau, 33rd National Pau 560 miles 896 kms on the day and ten years later his grandson “Nicholls” also won 1st National section Pau, 3rd National Pau, flying nearly an identical time of over 14 hours.  “Nicholls” was the only bird on the day west of Portsmouth which is in the middle of the south coast.  The next fancier did not clock in the west of England until the next morning, showing how far ahead “Nicholls” was of the rest of the convoy. “Nicholls” was also a grandson of “The Old Deweerdt”.  Ten years later in 2008 Geoff won the ultimate race in the UK at that time, the Tarbes Grand National.  He timed a chequer cock of similar lines to the above being a grandson of “Titch” a champion racer and breeder who was a son of “53”. “53” was responsible for many excellent racers and breeders including “Windcheater” who won 1st National section, 7th National Bordeaux, again winning against the odds, flying into the West of the country in a west wind, with the majority of the birds flying to the East of the country.  Another son of “53” was “Titch” who won many top National prizes, at distances from 100 miles 160 km through to Pau 560 miles, 896 kms.  Not only an excellent racer “Titch” bred “JW” who won 1st National Falaise 200 miles, 320 kms and  9th National Dax 525 miles 850 kms and a son of “Titch” bred “George” the Tarbes Grand National winner, George is the G/Sire of Farmer George who won 1st International Bordeaux by 63 minutes. The Dam of “Titch” was a daughter of “August” and the Dam of “Windcheater” was a sister to  “August”
“John” won four prizes in the first eleven of National racing, a record at the time. He bred “Unlucky for Some” who won 2nd Classic from Nantes.  The winner of Saintes National for Stan Dangerfield was down from “John”.  The list of winners for other people is listed elsewhere on here, and it is a very impressive list.
Geoff will not hesitate to retire a good racing cock if he is also breeding good young birds.  Most of the time his stock loft comprises of retired racers or children of top racers.  Geoff scours the internet and other outlets to try and source the best possible new introductions for the breeding loft.  When Geoff introduces new stock he will pair them to his best birds, if this is successful, this cross is then paired back into his own family.  This ensures the quality of his original stock is enhanced, never diminished.  He has tried many introductions over the last twenty five years, but very few have stayed.  Geoff purchased some Van Elsaker Jepson birds in the early 1990’s one of these, the sire of “Day Break” Geoff’s Merit Award winner, was the Grandsire of Mark Gilberts International Dax winner.  Geoff also bred and raced the Dam of Mark’s International winner.  What is remarkable about this family is their ability to win from 45 miles through to 650 miles. When the weather is hard, this is when these birds come to the fore.  Geoff has multiple timings when other fanciers do not see a pigeon.  The latest introductions are some direct H.P. Brockamp birds.  He has two sons of “Euro Diamond” a daughter of “George” and a son of “Marseille 09” and although it is early to judge, so far Geoff has been very pleased with these introductions.  A Brockamp / Cooper cross called “Wollongong” was 4th National from Tours 300+ miles as a young bird, flying across the sea.  This was a hard race and Geoff was impressed with the quality of the Brockamp birds when crossed with his own. Wollongong went on to win 1st International Pau by 32 minutes.
Hopefully this gives you a brief insight into how Geoff has developed and is continuing to develop his family of birds. 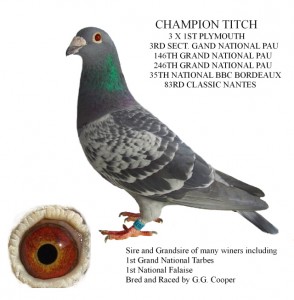 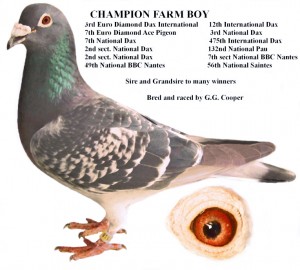 Farm Boy, a top International racer and A1 breeder

The birds are raced on the simplest of widowhood systems, paired in January, rearing two young birds at the start of the season, then separated until the end of March, when they are repaired and allowed to sit approx four to six days.  The hens are then taken away and the birds are then on widowhood being exercised for a hour, twice a day. During this time they have two short training tosses from five to twenty miles.  There is no training after this, as it is not needed if the birds are exercising well and also there are so many Perigine falcons on route. The hens may or may not shown before racing. Geoff likes the birds to be calm when they are in the basket, but he makes sure the hens are always there on the cock’s return, it is important not to let the birds down. All the yearlings go to 300 or 400 miles, it depends on how hard the 300 mile race is.  The two year olds go to 400 to 450 miles and if this is an easy race then they may go to 500+.  If they are fast two year olds Geoff may not send them to 560 miles preferring to keep them another year.  The young birds fly the full young bird programme including any National or Classic.  The young cocks may be stopped after one channel race but the hens will go to as many as possible.  A few years ago now, at the end of young bird racing in September Geoff organised a young bird National race with High Littleton club.  It was from Tours in France, over 300 miles to Peasedown St John,.  Geoff believes that young bird channel racing is getting shorter and shorter and to have good pigeons they need to be tested as young birds. As Geoff raced mainly cocks at that time, the hens need to be tested in their first year, any which do well were then placed in the stock loft and confidently bred from or placed in the old hens racing section.

The race birds are all fed on a mix Geoff makes himself, using Verselaga and Willsbridge corn. This year Geoff altered it slightly, a little more of this and a little less of that, he checks the food values of all the corn and tries to get the balance of fats, carbohydrates and proteins just right.  When people ask what the birds are fed it is difficult to answer as Geoff may change the proportions  of the mixture for different races, he thinks it is like fine tuning a racing car engine and different birds going to different races have different needs.  He does not like a race mix with more than 13% protein, not even for young birds.

Geoff firmly believes in keeping it simple, health, motivation and fitness, if you can have all three together and you have well bred birds then success should not be far away.
The stock loft is the hub of the loft, it is from here your success starts. In the loft at the moment there are winners of four Internationals, two second International winners and George the Grand National winner from Tarbes, all bred and raced by Geoff plus several sons and daughters of International winners. If someone does well with a bird from Geoff’s family then Geoff will always be pleased to have one back for the stock loft.  This way you introduce new vigour, without losing the winning line. Geoff’s advice to anybody would be buy the best you can afford, one pair close to the winners are better than two pairs a generation away.
This family have bred winners and National winners for many other fanciers, in 2010, six out of the first eight in the Grand National from Tarbes and nine out of the first fifteen all shared the same bloodlines  This included Geoff winning 1st, 2nd, and 3rd, National prov (section) G from Tarbes, 8th, 14th and 35th Grand National Tarbes.

Recently Mark Gilbert has won 2nd International Bordeaux yearlings with Southfield Abigail a grand daughter of George, in addition to winning 1st International Dax with Southfield Supreme, who is the same lines as Daybreak, our National Certificate of Merit winner and sire to Daybreak Junior, 2 x 1st prov. Barcelona and 5th and 6th Barcelona National.